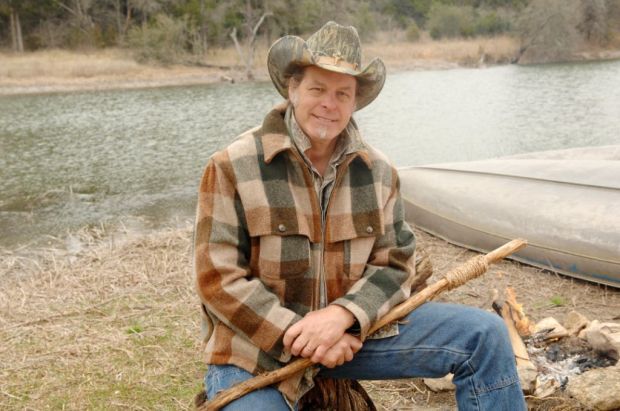 A list of Outdoor Reality Shows wouldn’t be complete without adding Ted Nugent, the host of Spirit of the Wild. Ted’s been hosting a variety of Outdoors Shows since 2003 making him one of the most successful outdoor personalities on TV. Nugent’s latest Show called “Spirit of the Wild” seen on the Outdoor Channel, is also the name of a popular album recorded back in 2005.

Surviving Nugent started in 2003 with a two-hour Outdoor Reality Show featuring Ted Nugent teaching city-dwellers how to survive in the wilderness on his Michigan ranch. The Show was an instant success for VH-1 and a four-part miniseries called “Surviving Nugent: The Ted Commandments” was filmed the following year on Ted’s other ranch in China Spring, Texas. How long could you survive living by The Ted Commandments with a $100,000.00 prize?

In 2005, Wanted: Ted or Alive premiered Ted Nugent back on his Michigan ranch having an excellent time at the expense of his guests. In total, they’re eight episodes of Wanted: Ted or Alive filmed over two seasons. Ted says the first rule on his Outdoor Reality Show is “If you want to eat you have to kill it.” He then proceeds to kill and skin a chicken on National TV. It was a rating Hit for the Show because everyone talked about what Ted did to that poor little chicken. It was also a small hint how far He’d go when making a “real” outdoor reality TV Show.

In 2009, Running Wild from Ted Nugent made its debut on CMT. Ted invites his guests to his wilderness ranch, and then hunts them down with his son Rocco. How far can you possibly run when you’re on Ted Nugent’s ranch and he’s hunting you down like a Trophy to add to his collection?

Spirit of the Wild

Ted Nugent’s new Spirit of the Wild Show now on the Outdoor Channel. Compared to Nugent’s earlier Outdoor Reality Shows, the Spirit of the Wild’s anything but fun and games. Sure, you’ll still hear about the Ted Commandments, but when it comes to “real-life” Trophy Hunting the Spirit of the Wild is the “Real Deal.” No one can fake those types of emotions coming together at the same time. Some of the hunts on Spirit of the Wild’s at Ted Nugent’s 340 acre Michigan hunting grounds called the Sunrize Acres. You can also hunt buffalo, trophy whitetail deer, and several exotic animals that are thriving on his property(s). How much does it cost to go buffalo hunting on Ted’s personal hunting property? The Sunrize Acres charges $5000.00 for a Bull Buffalo Hunt, not including Ted Nugent as your hunting guide.

The Spirit of the Wild has Ted Nugent going hunting around the world for a variety of different game. The video below is Ted going black bear hunting in Quebec, Canada, with a bow. Usually, Nugent’s always armed with at least one side-arm, but the Canadian laws forced him to give up his right to protect himself in the Wild. If this video doesn’t want to make you go bow-hunting for bear, nothing will!

Ted Nugent is one of the richest Outdoor Reality Stars on TV. His first success came from selling over 30 million albums worldwide dating back to the 70’s. Instead of squandering his fortune buying gold chains and fancy cars, Ted collected hundreds of acres of prime hunting land mostly in Texas and Michigan. Little did Ted know those investments getting away from the rest of the world would spawn a new lucrative career doing exactly what he loves to do, Hunt. Without those early investments, this Outdoor Reality Star might never have been born.

Ted Nugent’s Net Worth is estimated over $30 million including over 800 combined acres of prime hunting land filled with exotic animals and trophy deer. Nugent clearly has always practiced what he’s preached when it come to the Great Outdoors.

Watch the Spirit of the Wild on Outdoor Channel