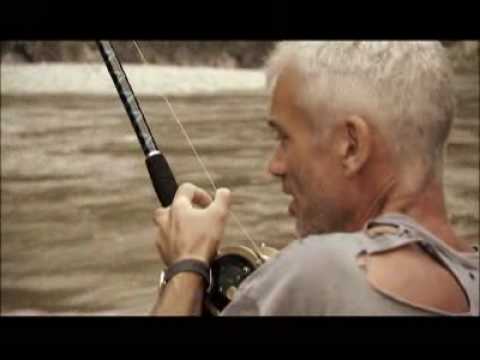 Is the River Monsters Show seen on the Animal Planet a real outdoor reality show or is it fake? When it comes to reality shows, the River Monsters with legendary extreme fisherman Jeremy Wade is about as real as it gets. Besides, how could you possibly fake catching river monster fish on Que? Jeremy travels the world in search of the biggest, baddest fish this planet has to offer. In lots of ways, it’s a little scary knowing some of these very real river monster creatures still exist considering some of the rivers our families been swimming.

In the video below Wade goes into detail how He first learns about River Monsters from reading old books and sources having first-hand encounters with some of the largest and scariest freshwater fish ever recorded.  After spending countless hours researching his target fish, Jeremy hop’s on a plane with all his fishing gear and travels to some of the most remote places still left in the world. In several episodes of River Monsters, it’s like he’s stepping back in time visiting remote villages seemingly stuck in time.  Jeremy also talks about one of his most prized river monster’s he’s ever caught called the Goliath Tiger Fish caught in the Congo River Basin.  The Goliath Tiger Fish is a relative of the Piranhas but much, much bigger including 1″ razor-sharp teeth. It also has a reputation of attacking humans while being called “the greatest freshwater gamefish in the world” at the same time.

The Animal Planet featured Jeremy Wade on the River Monster’s in Season 2, Episode 201 catching this 78 pound Goliath Tiger Fish that certainly lives up to its name.

Can you catch a 250+ pound giant Arapaima on a fly fishing pole? You can if you’re an extreme fisherman like Jeremy Wade, and have your own reality TV show on Animal Planet that’ll send you anywhere to go fishing, just so long as you catch a River Monster or two while you’re there.

As far as the River Monsters being a real reality show filled with suspense and never knowing what the heck Jeremy’s going to catch next, we give his reality show a perfect 5 out of 5 Stars.